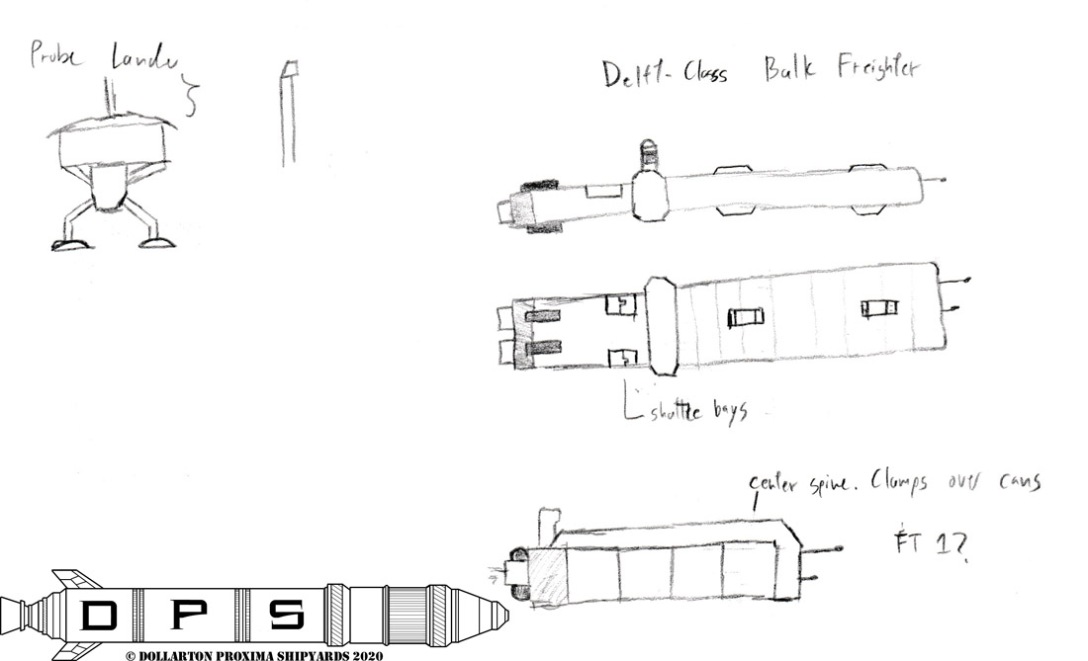 The Delft-Class Bulk Freighter is the antithesis of most other space freighters in service. Most freighters are higher-speed container ships; the Delft is a low-speed bulk cargo container. They were built not long after the first Landser-Class Battleships, leveraging the development of the warship frame for more commercial uses.

Unlike the standard Zweireiner-Class Freighter or its larger Provider-Class cousin, the Delft has comparatively minimal engineering spaces, giving it only one-quarter the speed of its smaller cousins. In addition, the Delft does not have container racks for the standard NF-8000 series containers. In its place they have a series of cavernous cargo bays for bulk resources. While nowhere near as flexible or quick to transload, in exchange the Delft can carry a truly impressive amount of cargo. In addition, the Deflt’s slower transit speed isn’t a problem given the processed ore or chemicals that are the Delft’s stock in trade.

Beneath the Deflt is a smaller rough-field container cargo ship, approximately half the cargo capacity of the Zweireiner. Unlike their sister freighters, there is no “standard” design, with approximately two dozen different classes and hull geometries. This version was originally built by Union Aerospace as a rough-surface capable design, and has easily outlived the corporation that designed and built it.

Finally, on the left is a small multi-purpose survey probe. Part of the Augen’s standard compliment, these probes help make the planetary survey process a quick and efficient one. The average survey of a world can easily use over a hundred of these probes, and they’re often one of the first pieces of infrastructure that a new colony will make use of on-planet.

The one thing worth discussing here is the Delft freighter. The Delft is the antithesis of what you’d expect in Starfire freighters: Big, slow, and with massive cargo capacity. The game system penalizes freighters below a certain speed, and also has larger ships have a higher maintenance cost. Neither of these are really that plausible, but that’s what they are. Still, I imagine there’s a market for slower, cheaper shipments, and the Delft is built to cater to that market.