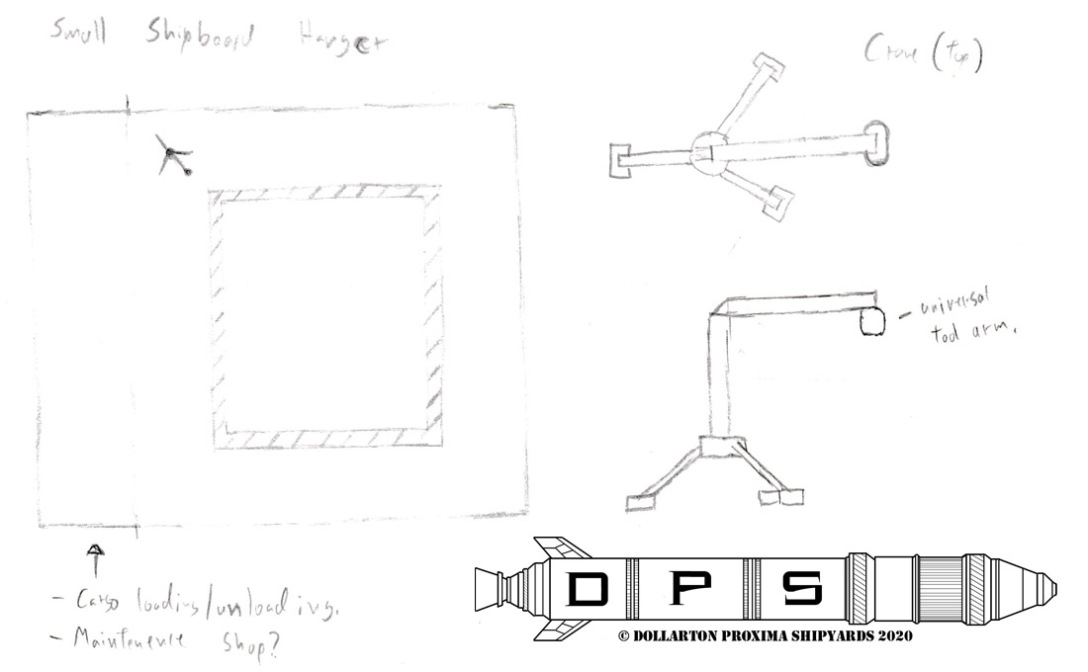 As part of the design work that has been put into the Augen Mk1’s deckplans, I did a bit of a look at the hangar for her single small craft. As with many smaller ships, working compartments often have to do double duty. Especially when they take up a fair amount of internal volume AND require external hull access. One thing that’s become clearer and clearer as I try to build out ship plans is that the biggest premium isn’t internal space, but instead external hull access. There’s a massive number of systems that either need hull access or benefit from being near or adjacent to the external hull, so systems have to justify being placed there.

The hangar above has one of those design compromises. The left sketch is looking from the dorsal position down, with the left edge forward. The central crosshatched area isn’t an indication of the external cargo hatch; it’s actually a floor hatch that goes into the ship’s primary cargo hold beneath the hangar. When the ship is undergoing a replenishment evolution, the onboard small craft are flown out of the hangar, and the lower hatch is opened, allowing cargo to be transshipped directly into the cargo hold without needing its own external hatch.

The crane sketch on the right is an exploratory doodle of a light maintenance crane, analogous to a present-day engine lift or the like. Something to help lift out or suspend heavy equipment safely so that it can be more efficiently serviced. The tool arm head is capable of having several systems attached to it (in order to best support operations), with legs capable of locking down onto the deck plating to prevent toppling due to unbalanced loading.

One of the challenges with this sketch was that I didn’t have much of a deck plan for any of the deWulf destroyer designs. As such, it was rather challenging to think about what kind of spaces would have been immediately adjacent to the hull amidships (where the damage was). This is doubly so given the rather light amount of documentation available for modern real-life warship design. This is totally understandable even given the fairly pedestrian nature of the information (at first glance), as even knowing the size and location of certain compartments can give hints as to what is installed or used there.

Still, some broad concepts were apparent from what documentation I have available: directly outboard compartments are, when possible non-critical ones like hardware storage, workshops, and crew accommodation in various forms. Depending on the ship, main hallways can have different layouts. In this sketch, I made the assumption that there are outboard hallways that these compartments open into. This is opposed to other designs where a ship has a single “broadway” hallway that runs lengthwise down the ship and is the main forward/aft thoroughfare of a ship.

This sketch can expect to become obsoleted when I eventually work out the deckplans and layout for deWulf destroyers sometime in the future.