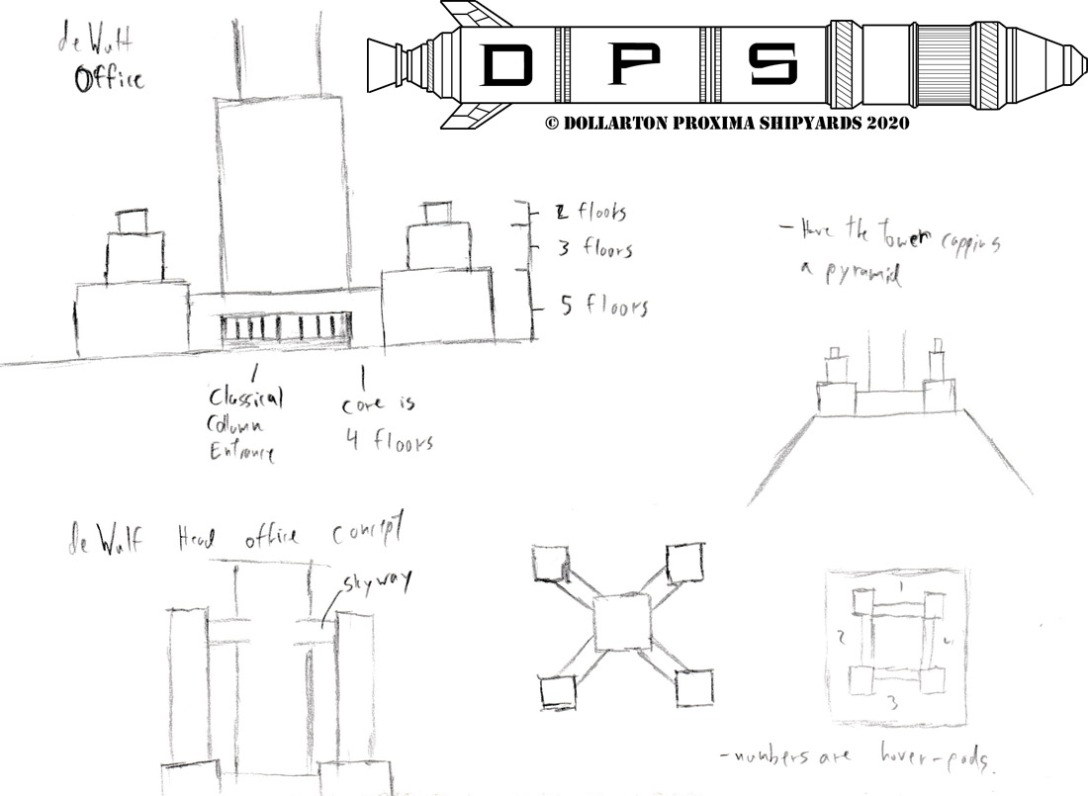 When the new capital city of Lowell was being built, deWulf Heavy Industries made a concerted effort to get in on the ground, as it were. Heavy construction was nothing new to DWI; their bread and butter in the pre-space era had been the construction industry, and a new headquarters had been in the planning stages literally for years. The formation of the new Corporate Democracy and the new capital were the final catalyst to start laying steel. While DWI was heavily involved in building the new capital, their new headquarters still absorbed most of their attention.

Built at the north end of the capital’s central peninsula, the foundations alone took months to properly engineer. As the rest of the new capital’s towers rose into the sky, the deWulf head office rose with them. Built on a broad base that held the tower’s required infrastructure (mass transit connections, freight handling and utilities), the core tower is flanked by four smaller towers rising out of an entry podium. The smaller towers go up a little over half the height of the main tower, with each of the four towers connected to the central one by a skybridge at the top. E

Other corporations built taller towers in Lowell, some of them beating the deWulf Heavy Industries building by a clear fifty stories, but deWulf was one of the few who could claim exclusive use, and none of the larger towers could make that same claim.

This sketch has a bunch of inspirations. Again I can’t remember when I did this one, but it might have been when I was on my last vacation, in the before times (yes, I’m using that phrase and you cannot stop me). I played around with various multi-towered ideas in the past, and this is the most refined design that I came up with. It’s kind of a weirdly modern hybrid between the old Genom tower from Bubblegum Crisis (that has a few other references in my universe) and the Palace of Culture in Warsaw.

The Genom part of it is the large “foundation podium” that the tower has. In Bubblegum Crisis that is the building, just a monolithic truncated pyramid. It works well in the anime because it’s such a massive departure from the more normal architecture, but here it wouldn’t have that same kind of uniqueness. The Palace of Culture on the other hand, swings for the other extreme. It has massive ground level wings that spread out at the corners of the main tower and a structure that is just overloaded with ornamentation. The deWulf head offices are kind of a weird hybrid of this; the massive Genom podium as the core structure, the overall physical layout of the Palace of Culture, but mostly built in a modern, steel and glass style.