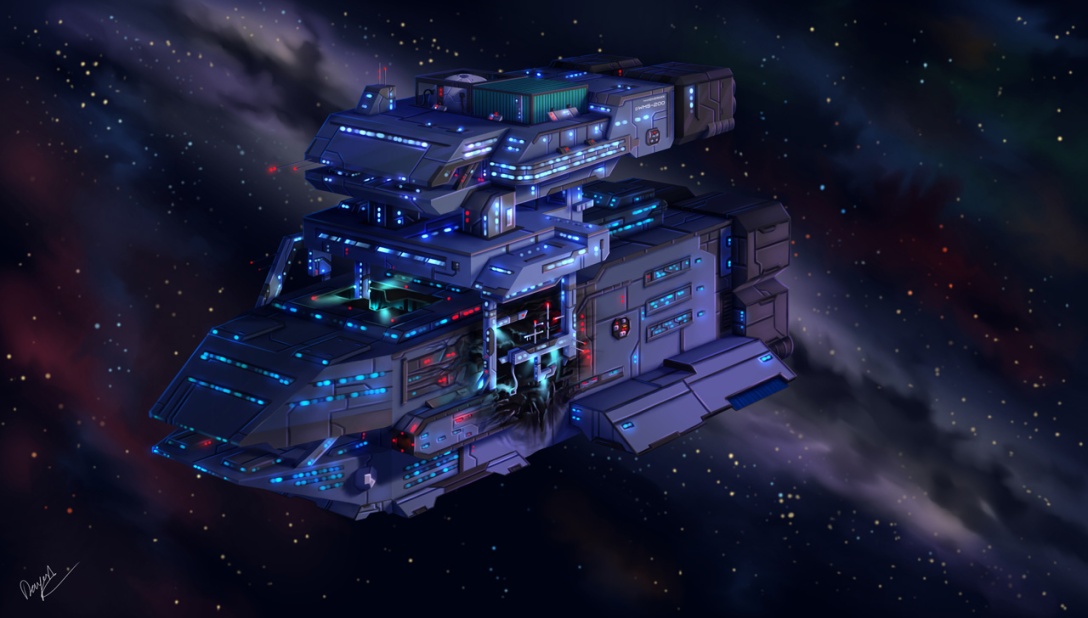 For a third time https://www.deviantart.com/d1d2m3 delivers! The third (and sadly final) image has been completed and done! While the first gave us a good look at at Bulygin-Class Frigate, and the second showed that same frigate putting that laser projector to work, this third one shows the aftermath. Moored against the damaged Slingshot-Class Destroyer is a Weaver-Class Mobile Shipyard doing everything that it can to make good the damage.

Weavers were the only kind of mobile repair capacity that the deWulf Navy had early in the war, and while not entirely adequate to the task (indeed, they were later replaced by the Labourer-Class Mobile Machine Shops) they were better than nothing. The Weaver itself was crash war production, and not much more than a stripped down shipyard, some cargo capacity, and engines to make it all somewhat mobile. In this case, the Weaver has deployed its construction gantry to support repairs, as well as providing “shore side” power and life support so that the onboard equipment can be fixed.

Much like the Slingshot and the Bulgyn, the Weaver has benefited from the skilled detail work that d1d2m3 is capable of. The original design had the repair gantry attached to the nose, but in this case it’s mounted ventrally, and it somehow fits better. In addition, the container modules are nestled amidships in proper cradles instead of just being “bolted” onto the sides of the hull. It’s perhaps a smaller ship physically, but with the construction gantries extended the Weaver is just as big as any destroyer.