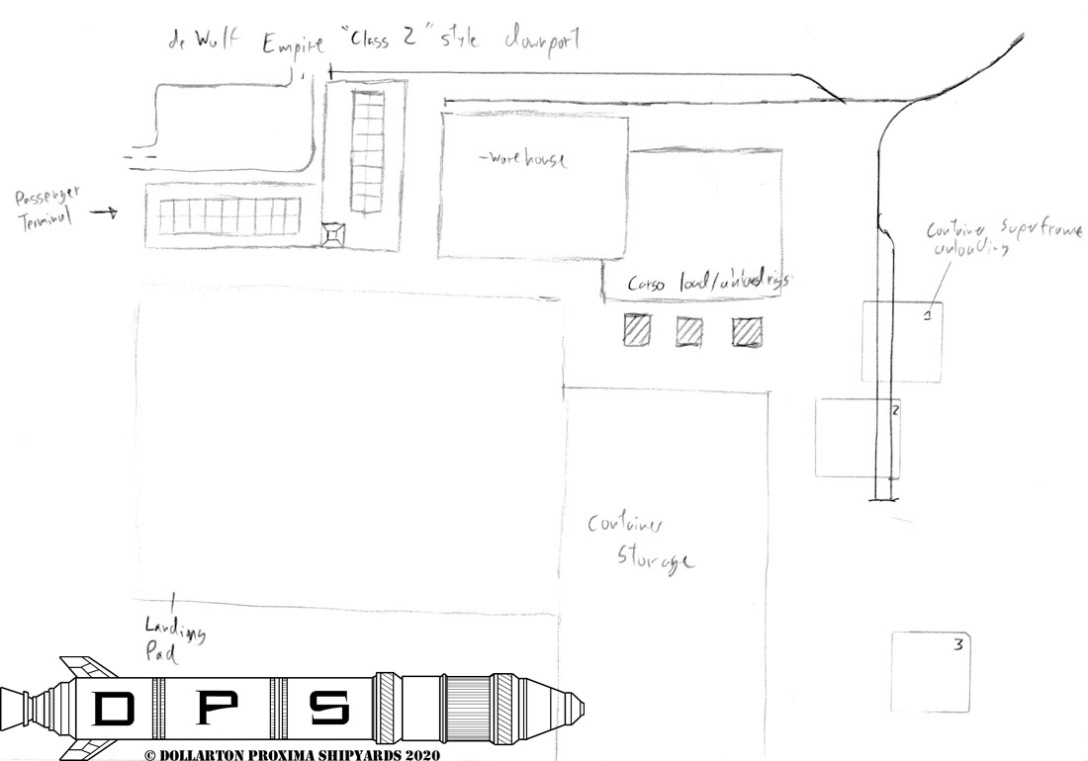 Almost every established colony has a downport. A facility where cargo moves up from the surface and down from space. Small, or newly established colonies make do with a few container offices and a clear spot of level ground with compacted soil. But larger colonies all sooner or later invest in a bigger, more efficient facility. Even more heavily populated colonies have multiple downports, using them both as long-distance on-planet shipping hubs as well as a link to interstellar shipping lanes.

The image here is of a larger class 2 downport. Having graduated from class 1 by having permanent, hardened structures, it now is verging on class three specifications by having diversified into having a passenger section (on left) and more extensive cargo handling equipment (on the right). Servicing both is a short spur section of the local maglev lines, providing a high volume link elsewhere on the planet. Clearly though, cargo is the bigger customer at this port.

The flow of freight is rather straightforward. Breakbulk freight arrives at the warehouse, either by maglev or ground transport before being loaded, usually into a large multi-level NF-8000 series container for pallet cargo. Freight loaded into ground containers usually arrives via rail, unloaded from the train before being transloaded into a NF-8000 series container frame. Empty container frames and ground containers are stored farther down, away from the warehouse loading stations and maglev yard. Once the NF-8000’s are loaded, they are then carried up into orbit to be loaded onto a container ship when it arrived. A large open landing pad rounds out the station, enough space for shuttles and smaller ships to land and transload freight and passengers directly to the terminals.

The idea for this stemmed from me reading (for probably the 50th time) the GURPS Traveller Starports book. The question of how freight moves in Starfire has been one that has bugged me for a long, long while, with the overall concept of it rather firmly locked in a 60’s pre-containerization mindset. This more than anything else bothered me, as containerization has been probably one of the biggest changes in shipping since steam power itself. So the more I thought about it, the more I started to pencil out just how freight gets handled in the deWulf universe. This is just one part of the whole process.