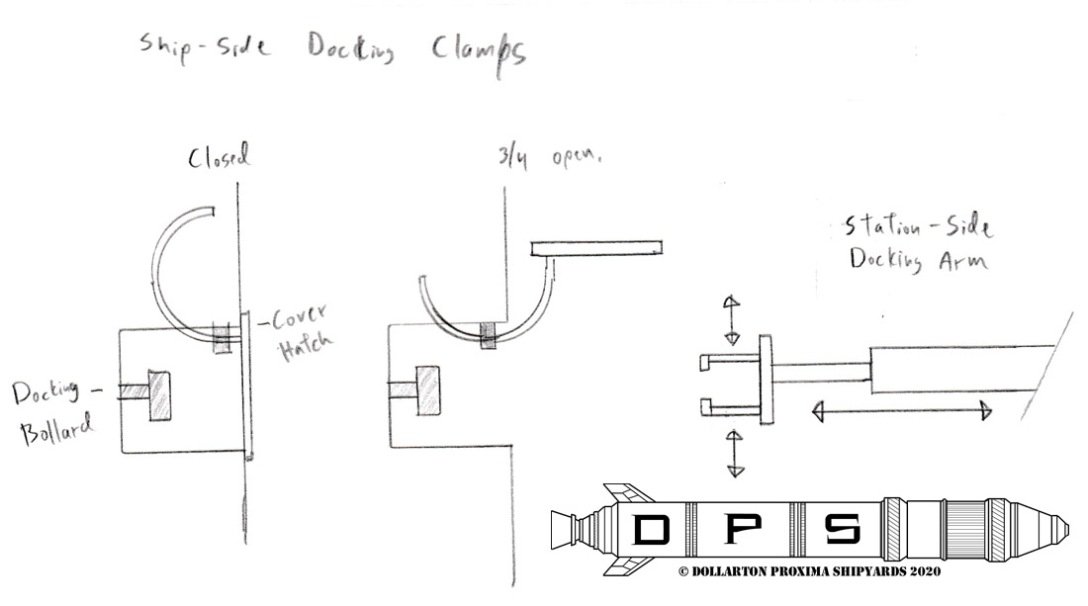 As deWulf ships grew larger and larger, it became apparent that they could no longer rely entirely on just docking adapters to remain secured. Once ships passed beyond even a thousand tons of mass, docking adapters were at risk of flexing or breaking just due to minuscule shifts in a ship’s position. Changes to make docking adapters larger, sturdier affairs helped, as did moving beyond a simple docking adapter to a combination passageway/main umbilical collar unit, but it was clear that was only a stopgap.

The system that eventually was designed and approved was composed to two separate parts. The first was the onboard “Docking Bollard” and a matching, adjustable docking clamp arm on the station. Initial designs looked at having the docking arm on the ship, or having two universal docking arms, but eventually the design settled on having the more complex part of the system on the station. This reduced shipboard complexity, and kept a more complex system where it could be more easily maintained. This meant that all a ship needed was a docking bollard mounted somewhere on the ship where it could be tied into the ship’s primary structural frame. This was a feature that was easily added to new ship designs, and retrofitted onto already existing hulls.

In operation, the docking system is relatively straightforward. As a ship maneuvers or is assisted close in to its assigned berth, it opens (if needed) hull covers to expose the bollards. Station-side, the arms move on a rail system to line up with the bollard before extending outwards to clamp down onto it, thus securing the ship. Once clamped, the docking arms slowly pull the ship into final position before docking arms are extended.

The smallest ship in regular service, the Augen-Class survey ship, has only one docking clamp amidships, behind her main docking collar. Larger vessels, such as the Zweireiner-Class freighter feature two docking clamps fore and aft on each side. From there, docking clamps increase in number, with most standard destroyers having four docking clamps and the massive Landser-Class battleship having eight clamps on each side. In order to manage different ship configurations, the docking clamps are mounted on a semi-flexible rail grid that lets them move around and orient themselves to properly hard-dock a ship.

One of the details that never really gets talked about is “how do spaceships dock?” I mean, we see ships float up to stations and just kind of… hover there. But if they aren’t moving perfectly in synch, then collisions and damage can happen. So, docking. We’re in space, so we can’t rely on things as simple as rope, a few cleats, and some inflatable bumpers. The actual mechanical design was originally inspired by a cutscene from the game Fallout 2, when the oil tanker finally reaches the oil rig at the end of the game; the ship cuts engines and drifts into the berth when large cones emerge from the sides of the dock. These cones then split open into thirds, and push into matching slots on the side of the ship. They then rotate, locking the ship in place. Very fancy, but also a bit overbuilt. Too many moving parts to ask for accidents. So I made something a little simpler; just a big clamp that locks onto a bar on the ship.