Remember how a few months ago I mentioned that one of my artists was back up and running and available for art? Well, I’m happy to say that they have taken a bit of time out of their busy life and got me a bit more character art! So with that I wish to introduce the Elysians!

Their existence violates one of the most commonly held truisms; that you can fly, or you can be a tool user, but you can’t use both. It seems that nobody told the Elysians that! Bipedal, but with a six-limbed symmetry (two sets of limbs plus a pair of wings that fues into the back along the upper spine), the average Elysian is a taller and more agile than the usual Fenren.

The first of the two is an Elysian Officer: 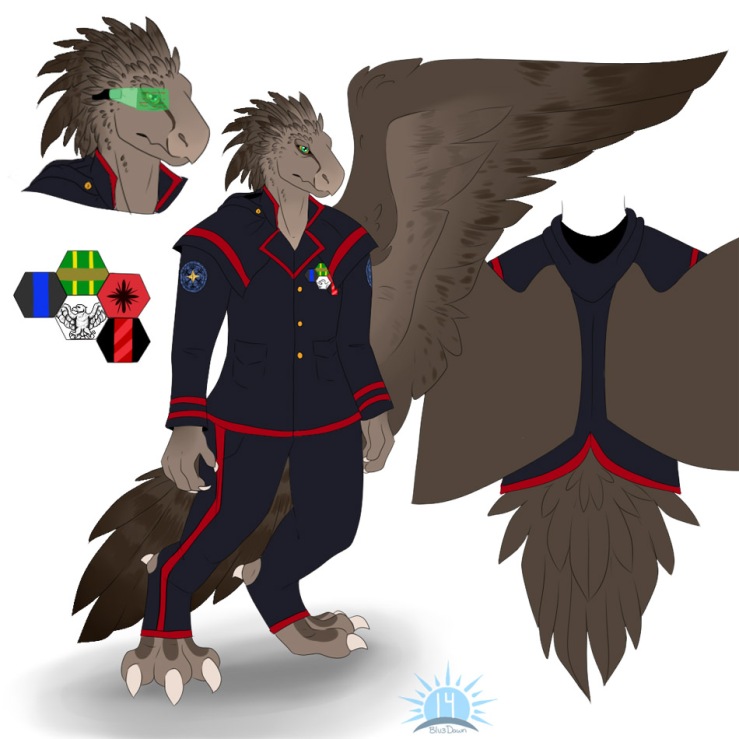 Unlike other species, Elysian uniforms have no rank or unit identifiers. Instead, all crewmembers have small holographic HUD units that tie into RFID-like systems built into every uniform. This allows crewmembers to be able to ID not just official rankings, but social and religious standings without having to make awkward questions or introductions. Commendations are the one thing exception to the rule, ensuring that while a civilian might not be able to identify who a specific servicemember is, they are able to ID what they have done. Another major difference is the lack of vacuum protection in their naval uniforms. With their ships heavily automated, combat stations are generally restricted to smaller armoured citadels deep within the ship, and if damage is significant enough to penetrate that, then survival at all was very much in doubt to begin with. 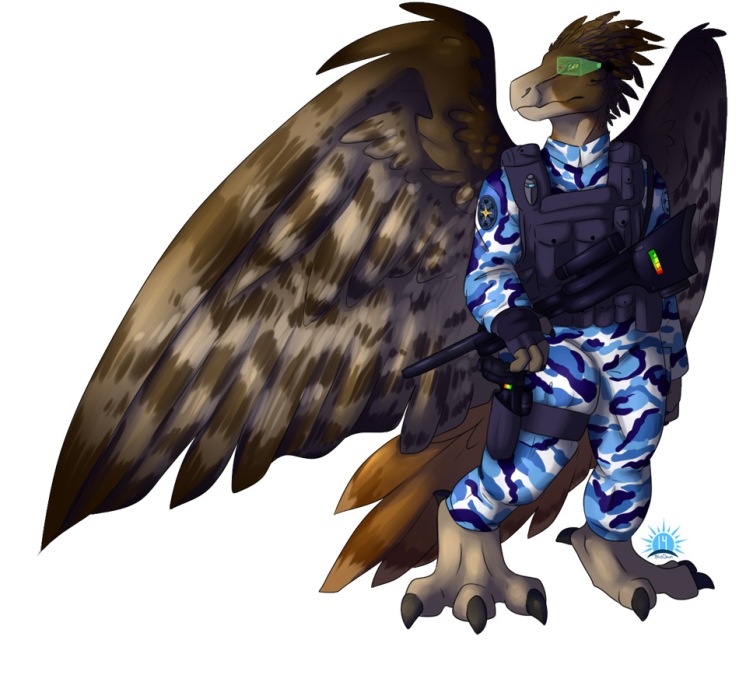 Ground combat uniforms are very similar, though with a few differences. The first is camouflage. In this instance this combat trooper is wearing a “winter urban” disruptive camouflage pattern most often seen during the ground combat around Finn’s Massif on Dave’s World. The fabric is an artificial weave that offers significant tearing resistance and impact spreading, though it is not proof against modern combat arms. He has the standard “Sylphe” model laser rifle, with an added scope for medium range engagements. Like most Elysian arms, while they have active targeting sensors, most combat troops prefer to use entirely passive systems to avoid drawing undue attention.

Also carried is a smaller laser sidearm for close-in, last ditch defensive use. While laser weapons provide perfect precision, the shorter range of the barrel and smaller power pack results in a correspondingly lower damage output. Finally, much like how naval crew rely on a holographic HUD and build in RFID, the trooper does as well. But in this case the RFID transmitter is a single unit on his right breast, making it easy to remove if needed.
I would like to take a moment to thank Blu3Dawn14 for doing this wonderful art, as well as several other pieces that can be found throughout this website. Her other art and contact information can be found at: https://www.deviantart.com/blu3dawn14