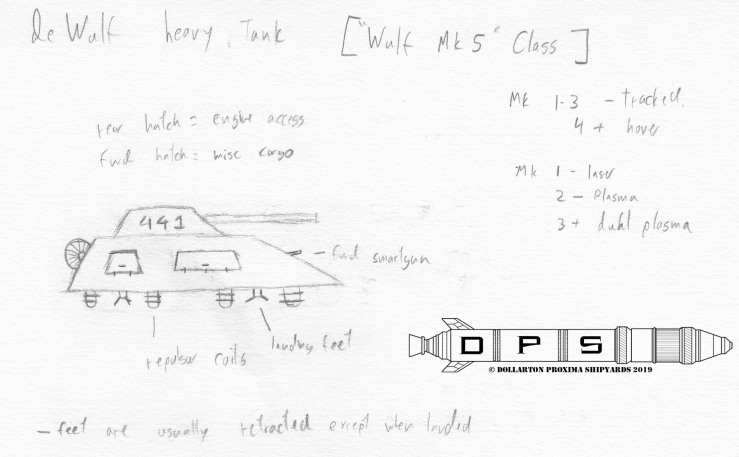 The Wulf gets its first mention back on turn 69, as it’s getting put through its paces on the test track, and this was the first ground vehicle that I worked out for the deWulf universe. It helped establish the basic lines for a deWulf ground unit: sloped armour all around, with a few hatches on the sides and a rear-mounted… well, thing. No idea what it is still, but it needed something on the back, and it got a kind of cylindrical radiator/cooler/thing.

Later models of the Wulf ended up picking up a second forward smart gun following ground combat on Dave’s World, where heavier suppressive fire was needed (most crews had made field expedient modifications where multiple smart guns were bolted onto the sides and front of the tank.

This sketch was also the first one where I settled onto what the antigrav systems on various units looked. It’s a rather simplistic design, but hey, it’s sci-fi. No reason it has to be really complex! And besides, if it’s going on a military vehicle it needs to get at least some ruggedization.